Graz University of Technology wants to use acoustic waves to detect track failures and worn components. In many countries, distributed acoustic sensing (DAS) is already being used to identify the location of trains. Ivan Vidovic is Research Associate at the Institute of Railway Engineering and Transport Economy at Graz University of Technology in Austria, and is working on a project to realise this goal. He is one of the expert speakers at the Intelligent Rail Summit 2018, taking place from November 27-29 in Malmö, Sweden.

Acoustic waves are already used for train location in a number of countries, including Austria, Japan, Germany and Switzerland. But, Vidovic wants to go a step further: using the same signal to identify railway track failures, such as hanging sleepers or ballast breakdown.

Vidovic: “When a heavy train passes, this creates a specific sound wave, with a characteristic pattern. When the same pattern is seen again in the sound waves, analysts immediately know that it is a heavy train.” This is how various types of trains are identified. In theory, this can also be used to identify defects on the track and with the switches. This technique uses fibre optic cables that already run alongside the track. Only one glass fibre is needed for this technique. In addition, a special unit is needed to monitor up to 40 kilometres of track.

Currently, TU Graz is working on a two-year project in partnership with a Central European infrastructure manager, in which this technique is being used. Until now, it appears to be successful. “As it stands, things look very promising. With the sound waves, we can see precisely when maintenance has taken place, for example, ballast tamping or rail grinding.” 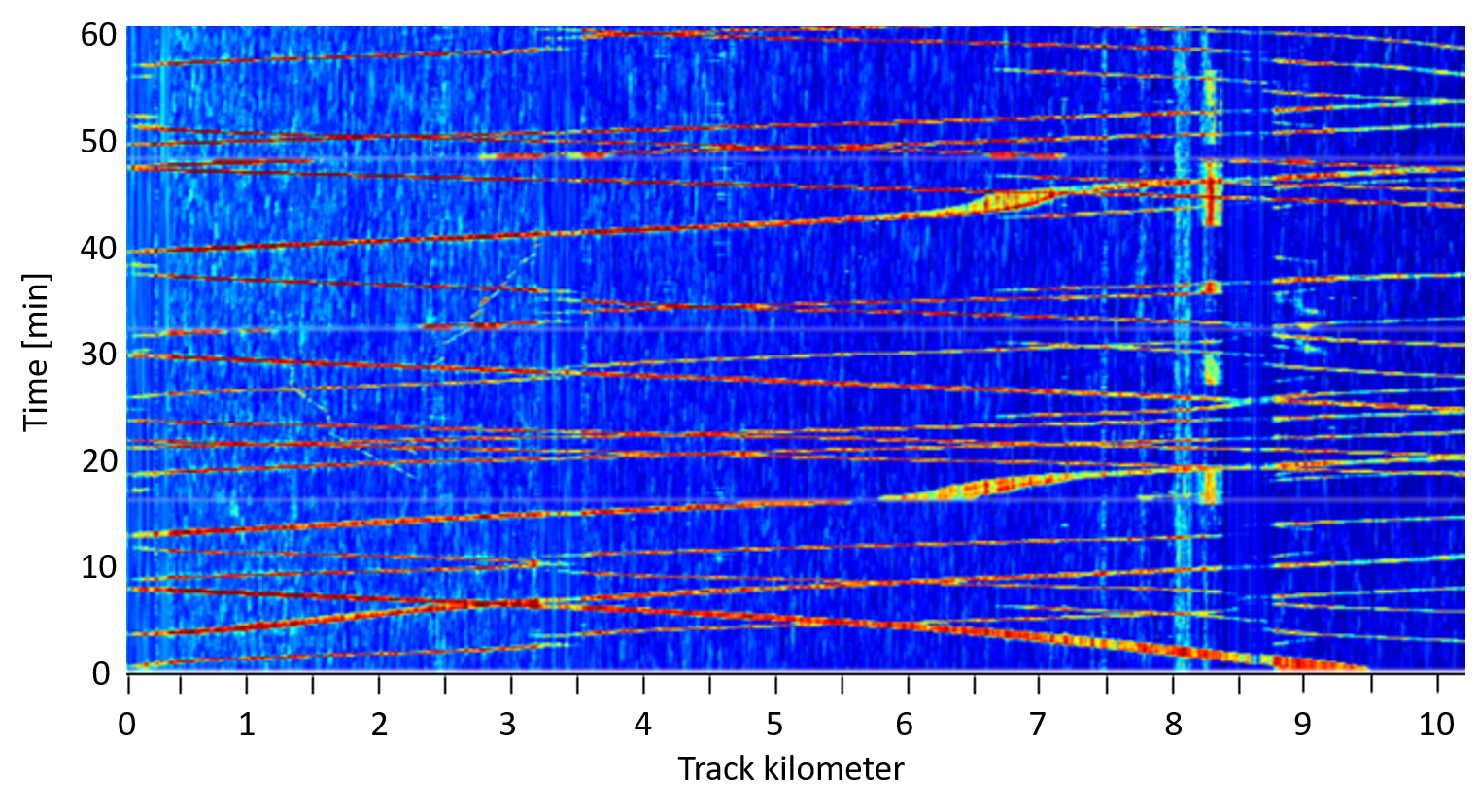 The advantage of this technique is that certain defects can be anticipated. If the sound waves appear in a particular form that is comparable to the form seen at the time there were problems, it is possible to trace back to see exactly what the problem is now – before it is too late.

“Rail infrastructure managers are always looking for new ways to monitor the state of the track,” says Vidovic. “This technology enables for continuous and comprehensive monitoring of track condition and rolling stock and can be used in addition to a track recording vehicle, wayside train monitoring systems (WTMS) and inspections.” If sound waves are used, it does not mean that the need to go and look at the track in person disappears altogether, but it does minimise it.

“There are ever-greater numbers of trains, so no one wants to close down a track for inspection issues,” says Vidovic. In many countries, trains ride to a tight timetable. “If the track needs to be closed, that costs money.” Furthermore, it does not take much for people to revert to using their cars. “If the track is unavailable too often, so the trains cannot run, people have no option but to get back behind the wheel.” This works counter to the modal shift.

It will take some time before this can be used in practice. “We have a lot of work to do before the system can be implemented,” explains Vidovic. Not only must the technique work and be extensively tested, but people also need to be trained to recognise the right patterns. And then, there is still the issue of the enormous amount of data that is collected.

“For 40 kilometres of track, you are talking about 100 gigabytes per hour. It is important to decide: what do we need, and what not? And if we don’t need some of the data, can we delete it?” This has to be investigated before the system can be put into practice. “I would guess that it will take a couple of years.”